Life took a sudden change for Detlef, from Berlin, Germany, when he was diagnosed with a thickening of the heart muscle—hypertrophic obstructive cardiomyopathy, in medical terms—in 2006. The presumably congenital disease caused his heart muscle to swell larger and larger in the left ventricle. This meant his heart was no longer able to pump enough blood to his body, which typically leads to life-threatening complications.

A short time later, he received an implantable cardioverter-defibrillator (ICD). “Immediately after the implantation, I took a heavy psychological blow. Due to my illness, I was unable to continue in my career. I even became unemployed and first had to put myself back together,” explains Detlef. He has managed to recover from this low point. Now 53 years old, he is trying to live his life as he had before the surgery. 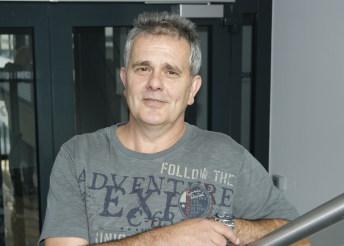 Follow-up care with BIOTRONIK Home Monitoring does its part to restore Detlef’s sense of confidence and wellbeing. It allows his physician to keep a constant eye on his heart. If a critical event occurs, he can be sure that his cardiologist will be informed. They can then promptly discuss the next steps to be taken together and adjust the therapy as needed. “The technology eliminates uncertainties and improves my quality of life. I can enjoy everyday life to the fullest without constantly having to think about my illness.”

Experts on their own behalf

His own experience and the desire to interact with others in need drove him to volunteer. He founded a self-help group for ICD patients with support from the Charité University Hospital in Berlin. The 53-year-old remains the chairman to this day. “My work primarily involves informing patients regarding their medical options to help make them experts on their own behalf and, most of all, to allay their fears about the implantation procedure.”

“It’s reassuring that the cause of my discomfort was finally discovered.”